8 Key Takeaways from the Grantmakers United for Trans Communities Forum

By Ryan Li Dahlstrom, Program Officer for the Fund for Trans Generations 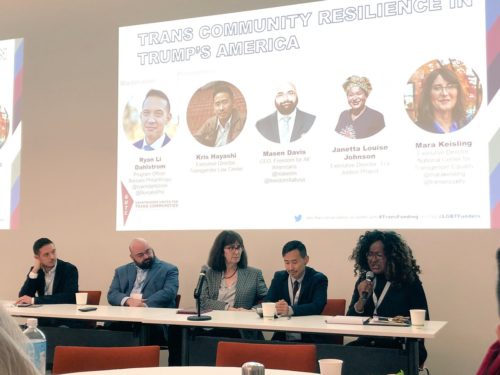 I recently attended the Grantmakers United for Trans Communities funder forum in Oakland, California in December 2018. It was the first of its kind and felt like a powerful, timely, and important space within this current political moment.

During the forum, I moderated the opening plenary, “Trans Community Resilience in Trump’s America” in discussion with trans movement leaders Kris Hayashi (Transgender Law Center), Miss Janetta Johnson (TGIJP – Trans Gender Variant Intersex Justice Project), Mara Keisling (National Transgender Center for Equality (NCTE)) and Masen Davis (Freedom for All Americans). These leaders shared their insights about the state of current trans-led organizing, this political moment, and how funders can best support trans work. Some of the key recommendations and takeaways from this panel were:

While all of these points are critical to long-term investment in trans-led organizations and the well-being of trans, gender non-conforming, and non-binary communities, the main takeaway I want to highlight is Kris Hayashi’s closing comments, encouraging funders to: “Stretch your funding, look at the trans leadership (or lack thereof) of the organizations you are funding, and explore creating your own trans docket.”

Overall, it was refreshing to see so many trans and gender non-conforming grantmakers, funder allies, and comrades who are committed to supporting trans-led work, and trans movement leaders together in one space. I look forward to seeing more new faces and institutions in the room at our next gathering. We still have so far to go to increase the mere 3 cents of every $100 in grantmaking across the U.S. that benefits trans communities.

If you are interested in learning more about Grantmakers United for Trans Communities (GUTC) and/or would like to strategize about how you can move more resources to trans-led work, contact Alex Lee, GUTC Project Director: https://lgbtfunders.org/initiatives/gutc/.

If you would like to connect with Borealis staff, grantee partners, funder allies, and others committed to increasing the funding of trans-led intersectional justice work across the U.S. and hiring trans and gender-non conforming staff members, please join us in January at the Creating Change conference in Detroit, MI for a reception that will be hosted by the Transforming Movements Fund and the Fund for Trans Generations. Details to be announced. Email FTG@borealisphilanthropy.org for more information or to join our email list.