Finding My People in Philanthropy: Reflections on Funding Forward 2019

I wasn’t sure what to expect from Funding Forward, but I was nervous. I had just started in my new role as a Program Associate for the Transforming Movements Fund, this was my first philanthropy conference, and I was going to be live-tweeting it for my job. But more than any of that, I was anticipating the painfully familiar feeling of being an outsider looking in. 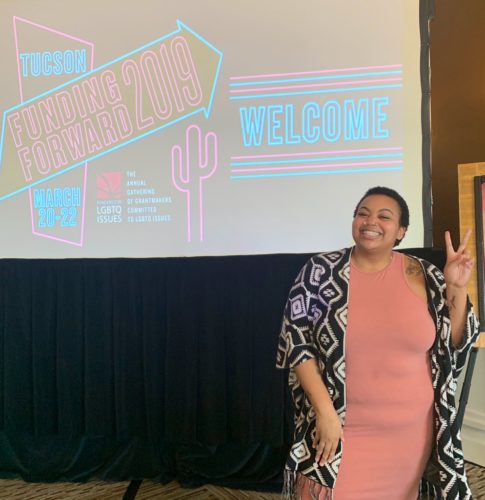 Despite efforts to transform the sector, such as the D5 Coalition, philanthropy continues to remain a white, older, and heteronormative space, even as the workforce becomes increasingly diverse. The sector does not necessarily align with my own identities of being a Black, queer, 20-something. For many queer and trans folks and/or people of color, it can be jarring to enter philanthropic spaces because you feel you don’t belong and, in a way, you are made to feel as though you don’t belong.

There have been reports on the struggles entry level professionals, LGBTQ+ folks, and people of color face. Funders for LGBTQ Issue’s special report, The Philanthropic Closet: LGBTQ People in Philanthropy, found that 31% of LGBTQ folks feel depressed or sad at work, while EPIP’s Dissonance & Disconnects: How entry- and mid-level foundation staff see their future, their institutions, and their field, reported that of the entry- and mid-level staff surveyed, 55% plan to leave the sector within the next five years. This is a real problem because without the perspectives of young, queer, people of color in philanthropy, grantmaking will not be informed by people with lived experience and will be less effective.

With this always in mind, I was nervous, anxious, but filled with anticipation going into Funding Forward, the annual conference hosted by Funders for LGBTQ Issues. However, once I attended Thursday’s opening plenary, it was clear this would not be a traditional philanthropy conference. “Lessons from the Border: Black and Latinx Migrant Organizing for Collective Liberation,” set the stage for my next three days in Tucson, Arizona. Speakers shared the importance of not only lifting up the voices of queer and trans leaders organizing and working on the border crisis, but also funding queer, trans, and people of color (QTPOC)-led organizations, centering healing and healing justice, and listening and trusting QTPOC and migrant leadership.

For the next three days, I participated in plenaries and workshops that focused on an array of issues such as protection for QTPOC activists in the digital space and liberation for LGBTQ+ sex workers. In these rooms were funders and organizational leaders who were LGBTQ+ and people of color, as well as our allies. I was witnessing a philanthropic space that was transformative, powerful, and representative.

I felt comfortable. I could be all of my identities without the fear of this “othering” feeling. I was able to connect with folks who were also millennial, queer, or BIPOC (Black and Indigenous people of color) working in the philanthropic sector and leading at organizations.

Seeing the leadership of young, queer, people of color felt powerful and resonated with me because it is also part of Borealis’ vision for uplifting new leaders in philanthropy. At Borealis, we believe that having staff members who reflect the communities we work with and support makes our grantmaking more effective at bringing about the changes we want to see in the world. Funding Forward made me hopeful that the philanthropic sector, over time, can be a space that is reflective of the communities they serve and communities that exist – communities that I call home.