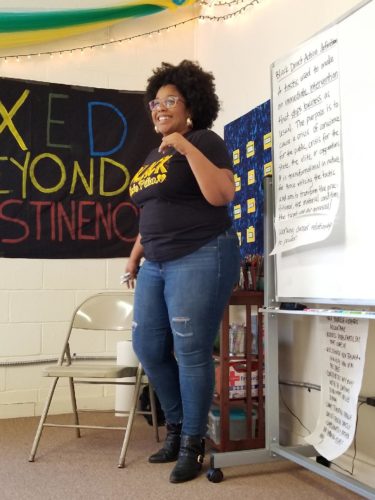 Chinyere Tutashinda is the Co-Founder and Co-Director of the BlackOUT Collective, a grantee of Borealis Philanthropy’s Black-led Movement Fund. The BlackOUT Collective is a Black Direct Action collective that provides on the ground support, training, and the opportunity for deep space visioning.

Read our interview with Chinyere about BlackOUT’s vision, the importance of direct action, and how funders can support movement building:

What brings you to your work with BlackOUT? What sustains you?

What’s BlackOUT’s vision? How is that vision connected to Black liberation and movement building?

BlackOUT is a full-service direct action and support organization. We do trainings, action support, and create space for deep space visioning – where we create spaces to think and experiment with liberation.  Most of our work is training on how direct action fits into campaign work and organizing work.

Part of the reason we believe in movement building is because what we’re trying to deal with is beyond one issue in one location. We know that there are systems of oppression that are interlocking and connected and if we don’t fight them in lots of different ways and from lots of locations we won’t be able to transform those systems. Campaign organizing is one part, so is building deep relationships with organizations across space, training people to organize, supporting infrastructure of movements so people can come together and strategize, and having organizations deeply rooted in one community. What the sum of all those pieces can do together is so much more than what they can do apart.

Can you tell me about a recent organizing win that you feel proud of?

I just had a conversation with an organizer in Washington D.C. who has been to a few of our direct action trainings. They told me that they used what they learned from us in an action against white supremacists. Instead of doing a traditional blockade, they used a block party to blockade the Unite the Right march.

They heard push back about doing it that way, but what they got from some of our trainings was the need to use new and creative tactics. Doing the blockade as a block party was really powerful–people couldn’t get past them.

We were so excited to see them grow their skills. They have been to three of our trainings – and now we see their work in action.

What should funders be doing to support lasting, systemic social change?

Organizations we talk to say they need training. There are not nearly enough organizing trainings and direct action trainings. What would it look like to fill some of that gap?

In this political moment, what does direct action make possible? Why is it important?

Direct action inspires and motivates people. If we’re talking about how to bring people in the movement, this is one way. A lot of people say they got into movements because of a march or a rally – they wanted to be part of that. I’m an organizer – there’s deep value in organizing and base building, and there’s also something around seeing the action and the outcome.

For Black people, actively confronting the systems that have oppressed them, whether that’s police institutions or political targets, is healing. Having agency and confronting targets is transformational for the participants. As an organization we are a part of a long history of direct action being used as a tactic. The civil rights movement heavily used direct action. There were trainings on how to do the boycotts, the sit-ins, and the marches. They had a specific tone, they had specific skills, to make sure things happened in those spaces. Because of that, people were able to win. That’s so possible in this moment. Being able to react and move in action is inherent and instinctual – adding a level of training, skill, and analysis to it is deeply powerful and can take us to the next level.

Looking ahead to the next year – what are you most excited about in your work?

We’re thinking about what it looks to have the first Black only direct action camp. We are hoping to do that in the first quarter of next year.

We are also launching a new program in colleges to help students understand direct action and direct action strategies. Initially we worked with several college students in the Bay Area and noticed a gap in support for campus organizing. When we talked to organizers, at least half of them got started on college campuses and Black folks in particular have history of direct action on college campuses. We are excited to bring that history to the forefront – give some context, theory, and skills around direct organizing to college students.