Supporting Intersectionality in Action at the Transforming Movements Fund

If you are active in social justice movements, you’ve probably heard the term “intersectionality” mentioned more than a few times. Introduced by Black feminist and legal scholar, Kimberlé Crenshaw, intersectionality is the idea that we have multiple identities—such as our race, gender, class, sexuality, ability, and more—and that these identities intersect and create unique experiences of marginalization that are best understood together rather than in isolation. Initially based on the invisibility of Black women, movements are increasingly embracing intersectionality’s embedded value that demands inclusivity as the best approach to building power.

Beyond greater visibility and inclusion, intersectionality put into action can also facilitate cross-movement organizing and advocacy. In essence, this suggests that while some social movements may be born out of a specific issue area or identity, they are stronger when they recognize peoples’ full lived experiences, identify shared interests, and pursue the hard work of collaborating with other movements. The Transforming Movements Fund (TMF) believes that that this approach most accurately reflects how movements can build power, sustain victories, and defend vulnerable communities, particularly during periods of backlash and political uncertainty. It is also essential to understanding how the TMF conducts its work in relationship to the LGBTQ movement and broader movements for change.

Our grantees are demonstrating intersectionality in action. In this moment, we are witnessing diverse communities coming together to protect each other amidst deeply troubling policies and attacks. LGBTQ young leaders are playing an important role in this work. They are not only advancing efforts to protect communities from harm based on sexual orientation and gender identity. They are also leading efforts to demand that #Not1More deportation takes place under a broken immigration system. They are on the frontlines in places like Ferguson, proclaiming #BlackLivesMatter. They are integral to the reproductive and gender justice movements, working to ensure all people have the power to make decisions about their bodies, families, and communities.

These LGBTQ young leaders are also bringing together movements that are traditionally viewed as isolated from each other. A recent example is the effort to expand sanctuary cities to include not only undocumented immigrants, but also Black communities and others who have been harmed by over-policing and criminalization. In short, these leaders have been challenging issue and funding silos. They are building more durable movements and they need our support. Yet, this work and approach often does not fit neatly into most funding strategies leaving a gap where resources are vital.

As a grantmaker that believes in this intersectional and cross-movement approach to organizing and advocacy, our grantmaking must also defy traditional issue or identity-based silos. In practice, for us this means general operating rather than project-based support; resources for self-defined leadership development goals; and a grantee-driven approach to strengthening organizational infrastructure. Our approach with the TMF is unique in that we support organizations and individual leaders who promote and lead this work. Specifically, the TMF invests in LGBTQ young leaders who are the driving force behind their organization’s commitment to intersectionality and cross-movement organizing. We support 14 local, state and national organizations and over 20 LGBTQ young people of color who are providing critical leadership that is uniting the racial justice, immigrant rights, reproductive justice, and LGBTQ rights movements. The TMF’s focus on the role of LGBTQ young leaders working across issues is just one entry point among many possibilities for supporting cross-movement work rooted in the value of intersectionality.

We are in a moment where breaking down silos and working across issues and identities is a necessity. However, this approach is not yet widely reflected in philanthropy. As funders, we have a timely opportunity to amplify this approach to movement building, but it will require a bold shift in how we structure our grantmaking.

The TMF is a collaborative fund that includes the Arcus Foundation, Ford Foundation, and Anonymous Donors. For more information about the TMF and to learn more about the work of our grantees, visit the TMF page. 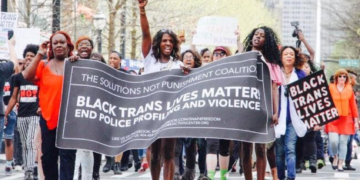