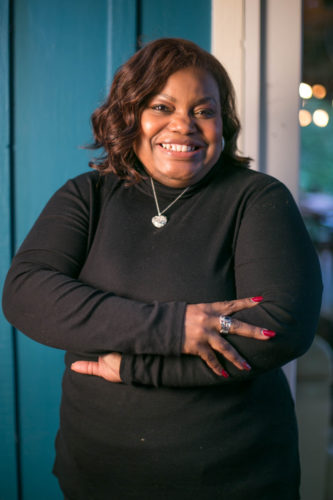 Meet Tracie Powell—the new Program Officer for the Racial Equity in Journalism (REJ) Fund at Borealis Philanthropy. Tracie is the founder of AllDigitocracy.org, which focuses on the media and its impact on diverse communities. She was most recently a Senior Fellow with the Democracy Fund, where she worked on the Public Square initiative that seeks to support informed dialogue through nonprofit journalism investments. Tracie was also a 2016 JSK (Knight) Fellow at Stanford University and has written regularly for the Columbia Journalism Review and her work has been highlighted by countless journalism and academic institutions, including Harvard’s Nieman Journalism Lab. Read her full bio here.

We talked to Tracie about what led her to this role, what she is most excited about for the REJ Fund, and why this fund is meaningful to her.

What led you to this role at Borealis?

This is a role I’ve been preparing for a very long time, even before I fully realized that I was preparing for it. When I left the mainstream daily newsroom I helped launch a website called DallasHapps and a regional magazine called Eclipse that received national attention. That was before there was any talk of start-ups or hyperlocal news outlets. I received investments from a hair products mogul and from a few well-connected people in the sports world. That was entrepreneurship. I was an early pioneer before it all caught on in the industry – having to raise money and build a successful product from scratch in the early 2000s. That was the start of my path to being an independent publisher.

It wasn’t until I launched All Digitocracy that I fully recognized the dearth of resources for publishers like me. All Digitocracy focused on how media impacts diverse communities, and how independent publishers of color are impacted in this landscape. That’s when I started helping build an ecosystem with Democracy Fund not only for hyperlocal journalism. Funders were asking me questions about who they should look at, follow, and invest in, in terms of journalists of color in particular. Being in this role at this fund is a culmination of all of the work I’ve done.

What are the principles that will guide your work on the REJ Fund?

I’m from the South, born and raised in Georgia, and I’m also very interested in making sure we have representation of news outlets across the country, not just the coasts.

How is the Racial Equity in Journalism Fund different from other journalism funding? What excites you most about it?

This is the first of its kind, this fund is specifically aimed at helping news organizations that target communities of color and underserved communities. There is nothing else like that out here.

Nonprofit dollars are still relatively new in the journalism space. We’re used to seeing lots of nonprofit dollars go to large players. What we weren’t seeing was enough dollars filtering down to publishers and news organizations that are serving the underserved.

Increasingly people of color are being laid off in media and now they’re launching their own products. This fund will also hopefully help them see themselves as publishers, and will help support their dreams in launching their own hyperlocals and innovative news products.

What challenges are you thinking about?

One of the biggest challenges is making sure we raise enough money to help these outlets be more sustainable. The demand is high.

I also want to identify the best way besides money to help support these publishers. I’ve had people ask about organizing structure, business proposals, and identifying which funders to talk to. Creating those kinds of supports is foremost in my mind. It doesn’t make sense to give publishers a pot of money and say go do this if they don’t know how to get started.

Why is this Fund needed in this moment?

The moment has been here for awhile. In a few years, the majority of people in this country will be people of color. If you are not reaching that community right now, you won’t be reaching us when we become the majority. Funders ignore the changes at our own peril. Journalism is critical for the survival of our democracy and because of that we need to be about the business of investing time, talent, and dollars into these communities that will be the majority of this country.

People need quality information in order to make the best, most informed decisions about how they live their lives, what kind of policies they want to see shape the country that they live in. Journalism is the only industry mentioned expressly in the Constitution. The founders knew it was that important for the public to have information to make informed decisions about how they want to be governed.

Why is this role and this Fund meaningful to you?

It’s humbling to know that a few years ago I was asking for money and doing pitch contests and now I’m in a position where I’m giving away money. When I get phone calls now, people say they can’t believe it, they have someone they can see themselves in who is now in the position of a funder – that is a very humbling experience. They know I know the frustrations and challenges, but also what gets them excited. They know that it’s one of them in this seat at the head of the table, and that’s really humbling for me.

Read more about the Racial Equity in Journalism Fund, the findings from the landscape analysis on media led by and for people of color that Tracie developed, and reach out to Tracie if you are interested in learning more: tpowell@borealisphilanthropy.org.