Two New Words for How We Invest in Media: Reconstruction and Reparations

A new vocabulary for news investments

Saving journalism won’t be enough: it’s time to reconstruct it.

— Farai Chideya in her introduction to “Reconstructing American News”

Two New Words for How We Invest in Media: Reconstruction and Reparations

In a time of reckoning, we need new words to understand the new values we want to pursue. Fortunately, we have leaders in the media who are building this language for us.

The vocabulary comes on the heels of history: Even as people of color have been systematically excluded from U.S. media (see the 1968 Kerner Commission Report on Civil Disorder), marginalized people and communities have continued to build incredible organizations of immense value to the U.S .media landscape. Scholars and historians recall that history to remind us that, yes, we have been here all along. (See Joshunda Sanders’ “How Racism and Sexism Killed Traditional Media” and Lewis Raven Wallace’s “The View from Somewhere” for just two of many examples.)

Or as a Ford Foundation report puts it: “While larger outlets are struggling to pivot to serve their communities, for those working with marginalized populations, this has been the mode all along.”

So how do we make up for lost time—the time we could have spent investing in these media organizations that are just and diverse from inception? This month, we’re calling attention to two reports that help us reframe how we think of U.S. media.

Farai Chideya of the Ford Foundation writes in her introduction:

“The recommendations of the Kerner Commission echoed the sentiments of Reconstruction-era advocates, who lobbied for the Civil Rights Act and the 14th Amendment, which guaranteed equal protection of the law. Journalism is a key piece of the democratic puzzle: it holds up a mirror to society, informs debate, and shows us whose voices matter. Saving journalism won’t be enough: it’s time to reconstruct it.”

The Reconstruction era as an example is striking. Advocates then presented different views for a nation post-Civil War and post-slavery. The successes and failures of this time — the ways in which justice was and was not served — is instructive to us now. What we are doing in American media today is not just making investments, but re-imagining what our ecosystem can look like. And our choices will help bring about equity or maintain the status quo in different shades.

At SRCCON (pronounced “Source Con”), held virtually this year in July, a sentiment came up throughout the conference: For white managers in journalism, the lack of diversity is a problem to fix. For people of color, it’s a trauma to heal.

“Up until this point, much of the focus for funders in this space has been on supporting innovation in products and platforms. It’s not paramount to resource new people, processes, and power relations,” the Ford Foundation report says.

It’s tempting to simply quote the whole document — which compiles shocking statistics about a lack of investment in POC-owned and led media — but you can read it all for yourself. Here is one more nugget, though, about what we can do differently: “Funneling money into legacy news institutions is not enough—they have trouble adapting, and need new energy and thinking. Nor is sprinkling little bits here and there to innovative new projects facing major uphill battles just to get off the ground. For major transformation, investment at the intersection of these two spheres is necessary.”

Investment at the intersection, that’s what the REJ Fund is all about. Contact Tracie about growing this investment in transformation.

Free Press is talking about bold action. Their new initiative, Media 2070, documents harms to initiate a conversation about reparations in the news media industry. If the Kerner Commission reminds us where we’ve been, Media 2070 will show us where we are. 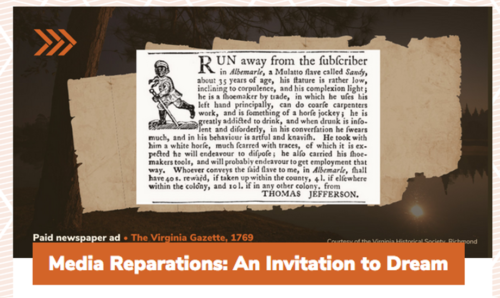 An Aug. 4, 2020 screenshot from act.freepress.net that shows a newspaper clipping of an advertisement by Thomas Jefferson looking for a “Mulatto slave called Sandy,” sourced from a “Paid newspaper ad – The Virginia Gazette, 1769. The headline below reads, “Media Reparations: An Invitation to Dream.”

“In 1919, it was the Chicago Commission that was naming the role journalism played in race riots, in 1968 it was the Kerner Commission that was naming the role that journalism used and media played in perpetuating racial inequity, and here we are 50 years later, kind of working on creating launching this project and in 2020,” Free Press’ Alicia Bell told Muck Rack. “We’re honoring that every 50 years there is a reckoning.”

Joseph Torres, author of News for All the People: The Epic Story of Race and the American Media, explains the concept this way:

“As we lay out in our essay, white media companies, from colonial times to the very present day, have played a central role in upholding a white racial hierarchy in our society. All these systems that have been created, whether it’s the media system, education, criminal justice, were never intended to work for Black people. The media has a long history of harm that includes advocating for and taking part in violence against the Black community.”

Bell says their work is building on broader reparations work:

What happens when you reframe your work in terms of reparations? Free Press has an interactive form to participate in their visioning. What will you add?

If you missed it, see last month’s report on Sara Lomax-Reese’s pitch to save Black-owned media. The short version: Make capital investments and give general operating funds to Black-owned media. Or, as Jason Cohen Donnelly wrote in the June 2 issue of A Media Operator, “Hire or wire.”

A screenshot of three stories in a carousel that reads, “Top stories” and has three news organizations coverage of Minnesota’s 5th Congressional District race.

Want to help us spread the word about the great work of REJ grant partners? Click on the links and tweet about these stories with the hashtag #RacialEquityJournalism.