During the Democratic presidential debates at the end of June, candidates sparred over a variety of far-reaching progressive policy proposals on climate change, immigration, healthcare, gun violence, college loans, and more. As they debated what was and wasn’t feasible and what could or couldn’t be passed by Congress, one thing kept coming up for me, and that is these policy issues are on the radar of these candidates because of the work of community organizers and social change movement leaders. And those community organizers and movements are supported by us, philanthropy.  What if funders helped make these policy ideas a reality by removing any barriers in our support?

For me, the debates were a reminder that funders can do so much more to support groups on the ground to influence the policy landscape and ensure disenfranchised communities can bring their vision and voice into the legislative process.

At the end of May, I received a crash-course in the world of policy-making and lobbying during my participation in a week-long intensive, Philanthropy & Public Policy Institute (PPPI) hosted by our peers at the Women’s Foundation of California. The PPPI is a spinoff of the Women’s Foundation’s 9-month intensive Women’s Policy Institute (WPI) state and Women’s Policy Institute (WPI) local – two programs designed to train community-based advocates on the fundamentals of lobbying in the public policy arena through hands on learning. In its 15 years of existence, WPI fellows, all 400 and counting of them, have co-authored and helped to pass into law 32 pieces of legislation. The WPI is currently accepting applications: apply here.

The philanthropy institute is a shorter version of WPI, designed to encourage funders to think intentionally about deeper investment in funding lobbying and playing a role themselves to influence policy makers and legislation. Not since grad school do I think I learned so much in such a short period of time. It was an invaluable experience and I walked away thinking, we’re not doing enough as a sector to influence policy at the state and local level.

There is a myth that runs rampant in philanthropy, a myth foundations often perpetuate, that 1) we can’t lobby and 2) we can’t fund lobbying. Neither are true.

And in fact, there are some foundations who REALLY understand the tool of lobbying and have used it to leverage their cause and the causes of their grantees to the fullest extent of the law. One step we have taken at Borealis is to remove unnecessarily restrictive language on lobbying from our grant agreement letters, which will give our grantees greater flexibility to engage in direct or grassroots lobbying within IRS guidelines. 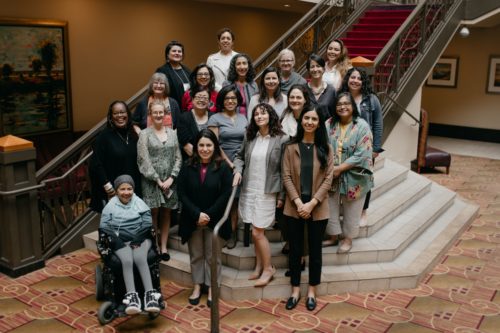 Participants in the Philanthropy & Public Policy Institute, hosted by the Women’s Foundation of California.

Now that I know better, I’m hoping to encourage my peers to really think about how we can better support our grantees in their role as advocates. Thanks to my time at the PPPI, I can articulate the following list of suggestions: