Until We’re Free: Philanthropy’s Role in Decriminalizing, Decarcerating, and Dreaming our Future 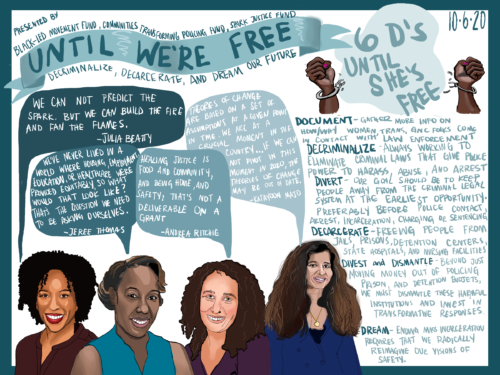 At Borealis Philanthropy, we invest in grassroots organizers and social justice movements working to create community safety for everyone. We honor the powerful leadership of Black women, girls, trans and gender nonconforming people who are working to end mass incarceration for people of all genders, while also recognizing that these same leaders and communities are being targeted and criminalized.

On October 6, 2020, Borealis examined the impactful strategies communities are driving through our donor-learning event, Until We’re Free: Decriminalize, Decarcerate, and Dream for Future, where we invited funders to support transformative community organizing by people who have themselves experienced criminalization and incarceration.

Until We’re Free showcased 6Ds Until She’s Free, a comprehensive cross-sector strategy to interrupt, reduce and end criminalization, mass incarceration and deportation of women, trans and gender nonconforming people. 6Ds provides a pathway for funders to respond to the immediate and long-term needs of the uprisings for racial justice and support grantees fighting for authentic systemic change, not only campaign or policy wins. Until She’s Free featured representation from the Black-led Movement Fund, Communities Transforming Policing Fund and Spark Justice Fund, which are working to disrupt systems of criminalization and incarceration that are targeting Black women, trans, and gender nonconforming folk.

During the webinar we heard from Jeree Thomas, Senior Program Officer, Communities Transforming Policing Fund, Julia Beatty, Director, Black-led Movement Fund, Katayoon Majd, Director, Criminal Justice Initiatives and Spark Justice Fund, and Andrea Ritchie, lawyer and researcher at Interrupting Criminalization. Together, they discussed the ways that Borealis and its grantees are engaging in the 6Ds strategy including funding groups that are working to end police violence, end cash bail, empty out jails, advance transformative alternatives to policing and incarceration, and foster spaces where people can dream.

“We are funding groups that are working to end cash bail, empty out jails, advance, transformative alternatives and build power in the communities most impacted by incarceration. We are very intentional about funding BIPOC-led groups. We have a very intentional focus on supporting groups who are led by people who have been formerly incarcerated or otherwise directly impacted by the criminal legal system.”

“In philanthropy, we’ve gotten the question all mixed up. We center ourselves around what we want to know about the work, rather than asking our partners on the ground, who we’re funding, what is it that you need to know? What can we help you and support you in measuring so that you feel like you’re learning along the way?”

The 6Ds strategy, developed by the Interrupting Criminalization Initiative and dozens of Black-led community organizations, calls for funders and organizers to Document, Decriminalize, Divert, Decarcerate, Divest & Dismantle, and Dream for a future where we may all be free.

In committing to a 6Ds framework, we are calling for funders to embrace the understanding that defunding police is not simply a budgetary exercise, but an effort to dismantle all institutions of harm and invest in community safety strategies rooted in the tradition of Black liberation.

“If you want to support folks in this moment, don’t just fund now for one year while police violence is at the top of everyone’s mind. Fund it next year and the year after that when there’s backlash from police unions and white supremacists, or when there’s a moment around implementation, that’s really critical.”

“We need to expand our understanding of violence to include police violence and recognize that the harms we see now are under the current system.”

Our Recommendations for Funders

It is our hope that by embracing a 6Ds strategy, funders may gain a more nuanced understanding of abolition and the invest-divest strategies that are all essential to the success of organizing and policy efforts. In centering the lived experiences and solutions of Black and indigenous women, women of color and femmes, trans, gender nonconforming and non-binary folks, we can end criminalization and create real community safety for everyone.

Ways that funders can support this work: