How to be an Antiracist: Reflections for Philanthropy

In September, Borealis Philanthropy, the Haas Institute for a Fair and Inclusive Society, and Northern California Grantmakers (NCG) co-hosted an event, Belonging in Practice: How to be an Antiracist, with Ibram X. Kendi, one of America’s leading antiracist voices and the author of How to Be an Antiracist.

Following his talk, Kendi was joined by john a. powell of the Haas Institute for a Fair and Inclusive Society and Lateefah Simon of the Akonadi Foundation for a conversation moderated by Alice Y. Hom of Northern California Grantmakers.

During the conversation, Hom, Kendi, powell, and Simon discussed how to dismantle racism and address our sins through an antiracist lens, touching on themes including power, grace, empathy, and more.

In this Q&A, Maya Thornell-Sandifor, Borealis’ Director of Racial Equity Initiatives, and Alice Y. Hom, Director of Equity and Social Justice at Northern California Grantmakers and Borealis board member, share their reflections on the event—what has stayed with them and how it will impact their approach to their work:

What parts of the discussion have been on your mind since the event? What has stayed with you?

Alice Y. Hom (AH): It’s really the energy of the audience that I’m thinking about. The honest conversation we were having— people were hungry for it. I had no idea we were going to get 1,700 people to register and end up with a packed audience at Zellerbach. One person said they left in tears because the conversation affected them so much, and they were going to bring back what they heard to their own institution. That was a mark of success and a mark of the critical need to have these conversations.

Maya Thornell-Sandifor (MTS): The dynamic between Dr. Kendi, john a. powell, and Lateefah Simon was really profound to me in that they each come from different backgrounds, professional experiences, and generational differences, and this made for a dynamic and rich conversation. Even in the case where they had differing opinions about anti-racism, it was presented with humility and respect for one another. If all conversations on race were approached with this level of humanity we would all be better off.

What are the ideas and messages from the book that you are continuing to reflect on?

AH: The book is not about saying, “I’m not racist,” but “I want to be antiracist, and how do I get there?” There’s no simple answer. It’s about the action you take.

Kendi has this framework of wanting to focus on the victims – he used that terminology as opposed to perpetrators. Instead of targeting the person engaging in the racist act and having them say “oh that’s not racist” – instead it’s saying, “Well, the person who you did that to, how are they thinking and feeling? How do we raise them up?”

MTS: There are many important messages in the book. One of the things that stays with me and that I continue to reflect on is this idea that in order to be a practicing anti-racist you have to reflect on what you’re doing in each moment of your life. This practice has made me very cognizant of when racist ideas pop up in my own thinking. I am constantly checking myself about both racist ideas, and how I respond or react to those ideas in any given moment. I have to say it’s exhausting, but at the same time I believe this is the work that we each need to do if we really want to live into being ant-racist. 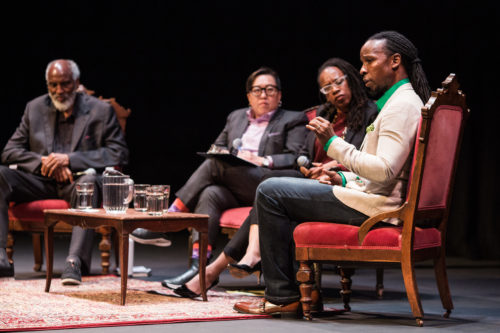 How is the discussion influencing your thinking about your own work and the role and responsibility of philanthropy?

AH: Philanthropy is rooted in capitalism, we’re in a field that is rooted in racism and slavery. How do we get people to understand that first and then do something about it?

Kendi is very clear it’s about policies. He wants to talk about antiracist policies or racist policies – they are either contributing to inequity or helping address the disparity.

Sometimes when I talk to people in philanthropy, when they hear me talking about racism, they might say, “But what about class? What about the growing wealth divide?” Race is connected to that. They inform each other. If you want to work on classism, you’re working on racism too. Economics is about racism, but in people’s mind that’s separate. How do I help people understand that the wealth gap is a racial wealth gap? I’m grappling with how to get people to see that it’s all tied together.

MTS:One of the things that powell said during the discussion is sticking with me, and he wasn’t saying it specifically about philanthropy, but I think it’s really relevant, which is this idea that if we focus on disparities we’re focusing too narrowly. I interpret that as, if we’re just closing gaps we’re not actually fixing the systems that perpetuate inequities and structural racism. He also said we can’t just be about what we don’t want, we have to articulate what we want. I think those of us working in philanthropy who are seeking to dismantle racism have to articulate a bigger vision—one that goes beyond gap closing and disparities to a vision focused on liberation at all levels.

Kendi talks about challenging power and the power struggle we are in right now. How do you think about power as it connects to your work in philanthropy?

AH: It’s about using the power that you have. Many people don’t think of themselves as having power, but there are people in positions of limited power and they can use it.

Kendi has a chapter in his book where he talks about Black judges and Black CEOS – they have power, and what have they done with it? Some have done nothing and others have done something. He says there are people in positions of power and they can be antiracist or racist in their policy making.

And my hope within my position of power – being on the board for Borealis – is to help move the organization to be antiracist and to help our field and the people who we partner with to be antiracist too. Whether it’s through example or showing how we do it and engaging them.

MTS: One of the things that Kendi said was, “we are either going to challenge power or we’re going to replace power. Because we are in a power struggle right now.” He was talking about this given the current social political climate. The one thing that makes me nervous in philanthropy is I’ve seen individuals get power in philanthropic institutions and then lose sight of this idea of sharing power and challenging status quo behavior—instead it becomes very much about their ego. I want to practice a more liberated power; that is, when I get any kind of power, how am I sharing it or giving it away to others? Because power and privilege are so baked into philanthropy, I think we should constantly be examining who is making decisions and for whom. If the communities impacted are not a part of the decision then we should pause and figure out how to shift the power. 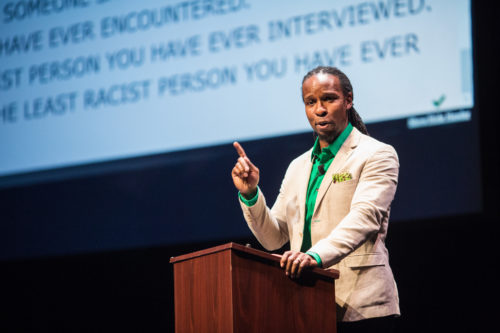 How can people be moved to think or act differently? How did the book and the discussion impact your thinking about empathy?

AH: One key question to think about is how do you build relationships with people, how do you see them on a human level? powell brings it back to the idea that it’s not enough to be against something, you have to be for something. He is not chasing after disconnection, which he feels like white supremacists do. powell wants to chase love, relationships with people, and joy.

Both Kendi and Simon talked about cancel culture, where you just say, “well you’re racist, see you later, I’m not going to deal with you.” If we don’t offer empathy to that person who expressed that racism to us and know that they have the capacity to change and they need to, then we will never get anywhere.

MTS: Both the book and the discussion made me think about grace. We have to have more grace with each other. We’ve all been indoctrinated with racist ideas and that means we all have work to do to unlearn and change our behaviors. Kendi said people will make mistakes and it’s okay for us to gently inform them of their mistake and have them learn and not repeat the behavior or action. To me that’s extending grace. It will require us to be patient with each other in a way that I think we’re not used to being.

The panelists discussed intersectionality during the conversation, and it’s an idea reflected in Kendi’s book as well. What are you reflecting on from the discussion?

AH: In Kendi’s book he says racism affects not just people of color, but white people. Sexism is not just about women, but men and all genders. Homophobia is not just about targeting queer people, but straight people are implicated as well.

He talked about the Black queer women who took him under their wing, and helped him see things differently during grad school. Had they not done that, he wouldn’t have been able to write this book. He knew he couldn’t write this book about racism without bringing up other oppressions.

I’m all about that broadening – Borealis is about that, we practice that. But I also know it is so difficult to have people understand that. I have to start where people are at – I know people are at places where they don’t get it. My role is to help them get it. To me, it is those kinds of conversations and opportunities to hear from others, coupled with action – what are you going to do when you get this information?

MTS: When Kendi said, “You can’t be a feminist and not be antiracist and you can’t be antiracist and not be a feminist” —that really struck me. Because I have been in numerous situations where people were playing the identity oppression Olympics, e.g. who is the most oppressed identity group, as if people don’t experience multiple oppressions at the same time, which we do. I think we have to wake up and realize that when we diminish someone’s identity because it’s not our identity, we are actually dehumanizing them. When we don’t take up the human rights of people who don’t identify in the way we do we are participating in their oppression. We are playing into this idea of divide and conquer and you don’t need to dig too far back into history to understand that the oppression Olympics is a losing game for everyone.

Watch the video of Ibram X. Kendi’s talk and the following discussion.