On Wednesday, June 26 at 10 am PST/12 pm CST/1 pm EST, Borealis Philanthropy, Funders for LGBTQ Issues, and the Third Wave Fund will host a #Pride4Liberation Twitter chat to talk about how to meaningfully and sustainably resource and support trans-led and QTPOC (queer, trans, and people of color) organizing. 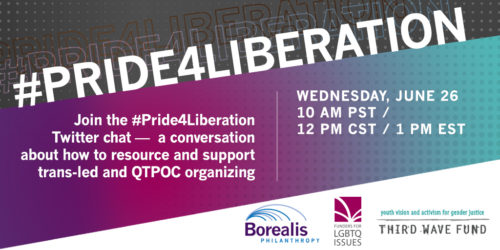 We know from organizers on the ground that Pride can be complicated for members of the LGBTQ community, whether that’s because of whose leadership is elevated, law enforcement presence, or the commercialization of a radical history of resistance and liberation. In a recent op-ed in Out Magazine about Pride, Raquel Willis, the magazine’s Executive Editor wrote:

“If the gatekeepers of our community (those powerful, mostly white, cis, able-bodied wealthy nonprofit directors, CEOs, political insiders) really believed in what our ancestors and transcestors at Stonewall were fighting for, we would see more elevating of grassroots Black and Brown leadership, the people who actually carry the torches lit by the founders of our movement.”

This June, we are reflecting on how we can follow the call to action put forth by leaders like Raquel. The #Pride4Liberation Twitter chat is an opportunity to talk about what has typically been excluded from what mainstream philanthropy often considers LGBTQ issues, and what we can do to support LGBTQ organizing beyond Pride.

We hope you will join us and share best grantmaking practices, celebrate visionary organizing, and learn from movement leaders.

Below are the discussion questions we will ask during the Twitter chat:

If you have any questions, please contact our Communications Officer, Zaineb Mohammed: zmohammed@borealisphilanthropy.org.